For Music, Dance and Art

The power of music is undeniable. Music moves us. But its effects go far beyond our surface experience of song and rhythm. On a visceral level, we've experienced something similar when our breath or heartbeat naturally falls into sync with that of our loved ones, or when we've clapped or tapped our feet in time at a concert or kirtan. As human beings, we instinctively experience synchronicity through both hearing sounds and feeling rhythms in our bodies.

We first learn to access this harmony through outer means like music, chanting, kirtan, and even our coordinated Ujjayi breathing. As we go deeper in our practice, we develop a deeper state of awareness, a kind of inner listening that allows us to touch a perfect harmony within. Eventually we can align ourselves with the most subtle vibration of the universe: what yogis and mystics have described for millennia as the sound of Om. This is the experience of music and yoga. It is profound and yet profoundly simple. It is perhaps the sweetest kind of journey, because it is the one that will ultimately lead us home. 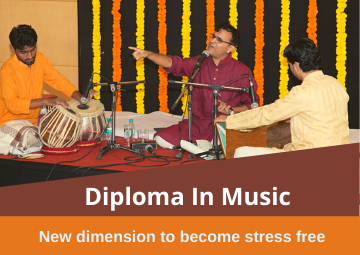 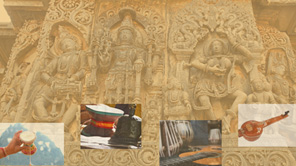 The founder members at SAYI draw inspiration from all our ideals one of them being Swami Vivekananda. Swami Vivekananda himself was a trained singer (though not professional). He received his classical music training from Beni Ostad. Swamiji once said “ Music is the highest art and, to those who understand is the highest worship.”

While discussing the preparations one needs to take to practise Bhakti Yoga, Vivekananda told-The greatest aid to this practice of keeping God in memory is, perhaps, music. The Lord says to Nârada, the great teacher of Bhakti, “I do not live in heaven, nor do I live in the heart of the Yogi, but where My devotees sing My praise, there am I”. Music has such tremendous power over the human mind; it brings it to concentration in a moment. You will find the dull, ignorant, low, brute-like human beings, who never steady their mind for a moment at other times, when they hear attractive music, immediately become charmed and concentrated. Even the minds of animals, such as dogs, lions, cats, and serpents, become charmed with music.

There is science in Dhrupad, Kheyal, etc., but it is in Kirtana, i.e. in Mathura and Viraha and other like compositions that there is real music — for there is feeling. Feeling is the soul, the secret of everything. There is more music in common people’s songs, and they should be collected together. The science of Dhrupad etc., applied to the music of Kirtana will produce the perfect music.

There is a yogic philosophy called Nada Yoga, which translates from Sanskrit as “union through sound vibration.” Nada is vibrational frequency and sacred energy that connects our internal self to our external self.

Sound is a unique sensory experience because it is both tangible (through words, music, and sound) and also an invisible energy that can be felt within. High achievements in art, music, etc., are the results of concentration. When we hear beautiful music, our minds become fastened upon it, and we cannot take them away. Those who concentrate their minds upon what you call classical music do not like common music, and vice versa. Music in which the notes follow each other in rapid succession holds the mind readily. A child loves lively music, because the rapidity of the notes gives the mind no chance to wander. A man who likes common music dislikes classical music, because it is more complicated and requires a greater degree of concentration to follow it. 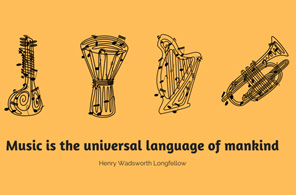 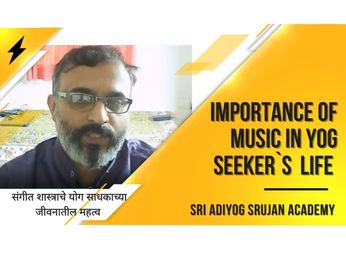 Academy Head Pritam Nakil
Pritam Nakil a passionate performer and a Guru, holds Masters in Classical Vocal from Lalit Kala Kendra (University of Pune) under the tutelage of Guru Pandit Vijay Sardeshmukh (disciple of legendary Pandit Kumar Gandharv).
Pritam’s foundation was laid by none other than Sangeet Natak Academy award winner Pt. Neralkar, famous Khayal vocalist in a Gurukul system in Aurangabad. He is currently under the guidance of the living legend, internationally acclaimed Dr.Smt. Alka Deo Marulkar, a acclaimed exponent of Khayal and Thumri. 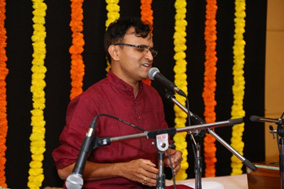 He honed his skills in various aspects of music such as aesthetics, criticism, history of music and applied music along with research terminologies. In addition he gained immense exposure to some profound ideas in music, such as detailed thought process behind rhythm, perfection of swara and Kumar Gandharva’s musical heritage. His ability was recognized very early on and he has been honoured with several awards and accolades throughout his career. With a natural aptitude and single minded devotion to master the art of music, Pritam has blossomed into an accomplished vocalist. He has made several notable performances in India and in the United States of America. Besides performing the art of Hindustani Classical music, he is a devoted teacher. His students have garnered appreciation and accolades for various levels of performances. His goal is to make significant contribution to the art form by passing it on to the younger generation. He has performed in many places across India and the globe. To name a few, Indian classical vocal in Rotary International Conference held in Falmouth, Portland USA 2010, Yashwantrao Pratishthan Nariman point Mumbai, Sahitya Sammelan held in Karad, Maharashtra and Deval Club Kolhapur. He was awarded Junior Research Fellowship by cultural ministry of Government of India for year 2014-15.The research project is titled ‘The study of Dhunugam ragas' discovered by Pt. Kumar Gandharv. Pritam was selected as a delegate from India to United States of America in a study exchange program. Visited various music schools and colleges in the state of Maine and New Hampshire, performed and delivered lectures on Indian Classical music. The tour was organized and sponsored by Rotary International in May 2010. He has received numerous awards in various competitions and festivals all over India.
Diploma in Music (Kavi Kulaguru Kalidas Sanskrit University Recognised)
“Music gives a soul to the universe, wings to the mind, flight to the imagination and life to everything.” ― Plato
Music is one of the means that brings peace to oneself. To learn music is to immerse oneself into the ocean of great happiness. Sri Adiyog-Srujan Academy brings to you a novel course that is sure to enlighten your musical interest; Diploma in Music. This is a unique course that will allow you to become competent in the field of Music. The course includes varied enriching subjects including the History of Indian Music, Notation and Detailed study of Ragas, Technical terminologies in Indian Music along with performances. The course has been carefully drafted to be suited for today’s Individuals who want to learn Music.

The learning outcomes of this course include: